According to documents accessed from the Ministry of Finance, these losses are only due to frauds of Rs 1 lakh or more. Some of these cases are being probed by investigating agencies.

In the latest development, the Central Bureau of Investigation, which is also probing the Kingfisher Airlines BSE 3.03 % case, arrested a chartered accountant of Udaipur and a businessman of Jaipur in an on-going investigation of a case relating to an alleged loss of approximately Rs 1,000 crore to Syndicate Bank.

Syndicate Bank is headquartered in Karnataka. In the said period, the bank has lost Rs 1,133.31 crore and has reported 445 cases of fraud involving Rs 1 lakh or more. 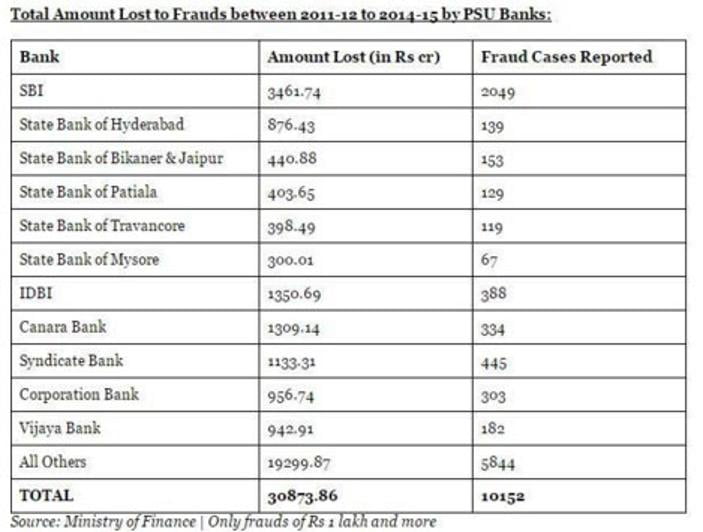 IDBI, which is also being probed in the Kingfisher Airlines case, has lost Rs 1,350.69 crore in the said period, while reporting 388 fraud cases.

The CBI, which is investigating the Syndicate Bank case, has registered a case under several sections of the IPC besides the Prevention of Corruption Act, indicating involvement of insiders.

In March last year, the CBI investigated a case against a private firm in Ahmedabad and its director after a joint complaint received from State Bank of India, Vijaya Bank and Canara Bank.

It was alleged that the firm expressing urgency for releasing the funds had got it released, pending execution of individual documents. Sources had pointed out that after the release of the money, the man disappeared from India.

In another case that year, an MD of a private firm from Bhopal was arrested after he went absconding in a case relating to alleged loss caused to State Bank of Indore. The CBI had said that he had conspired with officials at the bank and dishonestly & fraudulently obtained credit facilities on the basis of fake collateral securities.

Obtaining loans through fake documents is seen as a common modus operandi across cases, and investigators have often found involvement of insiders from the banks.